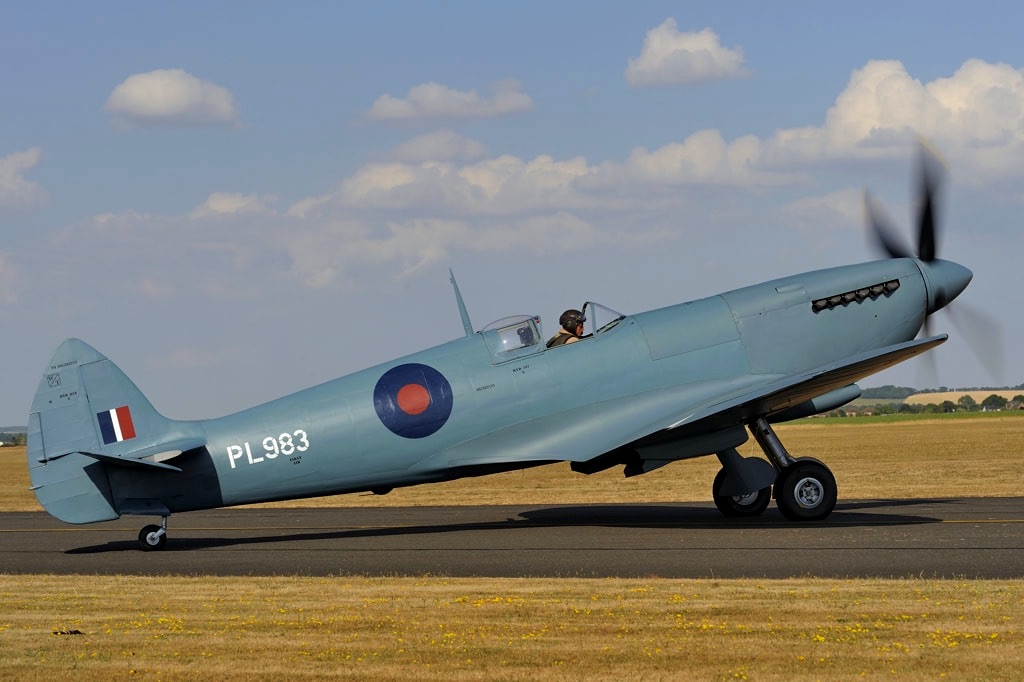 On loan to the Civil Air Attaché, US Embassy, London, Mr Livingstone Satterthwaite.
Reg. NC74138 on ...
Ferried by Lettice Curtis from Eastleigh to Hendon; Officially handed over to the US Embassy on 270148.
Frequently flown in and out of Hendon by Lettice Curtis when not required by the Embassy. When not required PL983 based at Boscombe Down.
Entered by Livingstone Satterthwaite in Air Race of Wiltshire Flying Club from Thruxton on 150848. Flown by Lettice Curtis. PL983 finished first.
Entered into the High Speed Handicap, part of the Lympne International Air Races, Lympne, Kent on 280848. Flown by Lettice Curtis, PL983 ended fifth. She broke the National 100km close-circuit speed record at 313.208 mph (505.045 km/h).

Returned to Vickers Armstrongs at the end of 0950 and donated to the Shuttleworth Collection.
Reg. N74138 cancelled. Ferried to Old Warden under B-Class registration as G-15-109, note there on 120953 with serial G-15-109 on (port) aft fuselage with US registration N74138 visible under the port wing.
For Raw, commencing in 1975. Moved by road to Duxford on 300875.
Put up for sale by the Shuttleworth Trust in 1982.
To Roland Fraissinet, France.
Trent Aero at Stonebroom commissioned to finish Raw.
Reg. G-PRXI on 060683 to Trent Aero.
Ff on 180784 from East Midlands Airport by Cliff Rogers.
Flown from East Midlands to Derby by Cliff Rogers on 180784.
Entered in Christie's Auction at Duxford on 130884.
Ferried to Biggin Hill on 011087.
Sold to WoGB, Biggin Hill in 1988, registered on 200688 to Doug W. Arnold of Bitteswell Ltd.
Moved to North Weald on 011087, dismantled and stored there.
Registered to Wizzard Investments of Jersey on 010199
To Florida, USA after death of WoGB owner Doug Arnold (?)

To Justin Fleming in end  1999. Registered to Justin Fleming on 120100. Moved by road to Goudhurst, Kent.
Under Raw with Martin Sargeant, Goudhurst.
‘JV-F’, (initials of the owner).
Test flown at Goudhurst on 080600.
Crashed on 040601 at Rouen, France during forced landing.   Pilot Martin Sargeant killed.
Soon after take-off the aircraft developed mechanical problems causing smoke to pour out of the engine. While attempting to make and emergency landing, Mr. Sargeant realized the aircraft would go into the crowd and dove to the right, impacting 300-500 meteres short of the runway. Wreck returned to the UK (...)
Registered to Propshop Ltd., Duxford on 040601; stored pending restoration.
Fuselage to Airframe Assemblies in late 2005.
To HFL for Raw. Noted with HFL in PR-blue c/s.
Ff on 180518 from  Duxford by John Romain.
Damaged on 220819 during landing at Midden-Zeeland airport, The Netherlands. The Spitfire was on her way to the Wings of Freedom show at Ede, The Netherlands. The port undercarriage collapsed on landing.    The pilot was unhurt in the incident.
Back at Duxford repairs were effected by early May 2020. John Romain took up PL983 for an air test on 070520.
As an appreciation for the tireless efforts made all those at the National Health Service, PL983 was adorned with a full-span "Thank U NHS" under the wings.  A 'Thank-You NHS' mission over Cambridgeshire was flown by John Romain in PL983 on 280520.