Dutch / English
Volcanism in New Zealand covers the North Island areas from The Bay of Islands, Whangarei, Auckland, and White Island to Ruapehu and Taranaki. The most active of these areas is the Taupo Volcanic Zone, covering the area from White Island to Taupo.  The most volcanic activity is situated in the North Island. The Tongariro National Park area and the Bay of Plenty coast have suffered the greatest volcanic activities in the past. Within the Tongariro National Park are situated Ruapehu, Ngauruhoe and Tongariro mountains.

The Auckland area is a volcanic field, consisting of 48 volcanoes. In a volcanic field each eruption creates a small volcano, but one which does not erupt again. This is thermed monogenetic. However, in the volcanic field a further eruption may occur at a different place, and is difficult to be predicted until the eruption is practically on the point of taking place. Volcanic activity in the Auckland area commenced around 150.000 years ago. Mangere, One Tree Hill, Three Kings, Mount Eden and Mount Wellington all erupted in the last 20,000 years. Rangitoto, the largest of all, with 58% of the total erupted material in the field,  was the last  eruption, taking place just 600 years ago.

Auckland - a city on Volcanoes 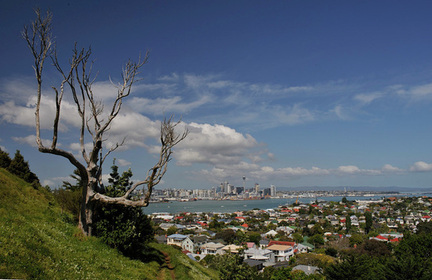 View on Auckland from Mount Victoria
Auckland is built on a volcanic field that has been active as recently as 600 years ago. Scattered through the city are dozens of volcanic cones. The oldest, Maungataketake, is about 50,000 years old, and the most recent volcano is Rangitoto Island. The eruptions that built each cone have been short-lived, spanning perhaps as little as 10 years.

It is perhaps helpful to think of the Auckland Volcanic Field as a single volcano which erupts from a new vent each time. There are, however, some significant differences between this field and other New Zealand volcanic regions. Because the magma reservoir is so deep there is no geothermal activity between eruptions, from which one may get the (mistaken) impression that the field is extinct.

Ruapehu sunset
The Tongariro  is a complex of multiple volcanic cones formed over a period of 275,000 years. There have been five reported eruptions from Te Māri craters and Red Crater between 1855 and 1896 and these have since been dormant.
Ngauruhoe is one of New Zealand's most active volcanoes. It is actually a large cone which has grown on the southern flank of Tongariro Volcano. Activity started at the Ngauruhoe cone about 2,500 years ago.
At 2797 m, Ruapehu is the highest mountain in the North Island, and the most recent of the North Island volcanoes to have erupted. Three summit craters have been active during the last 10,000 years including South Crater which contains the currently active vent. The active vent is filled by Crater Lake; water from this lake is frequently ejected on to the ice and snow during eruptions causing lahars.
Ruapehu reminded New Zealanders of the risk of living and working near volcanoes by erupting in 1995 and again in 1996. This last eruptive phase caused no fatalities but cost the local tourist industry dearly. Click here for more. 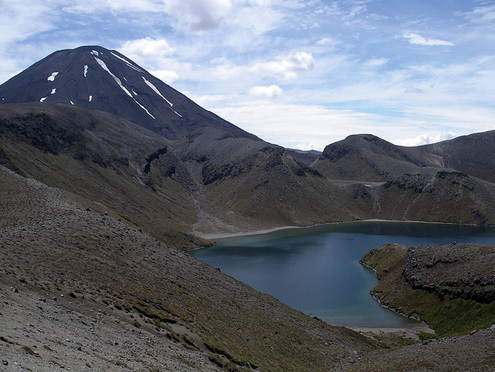 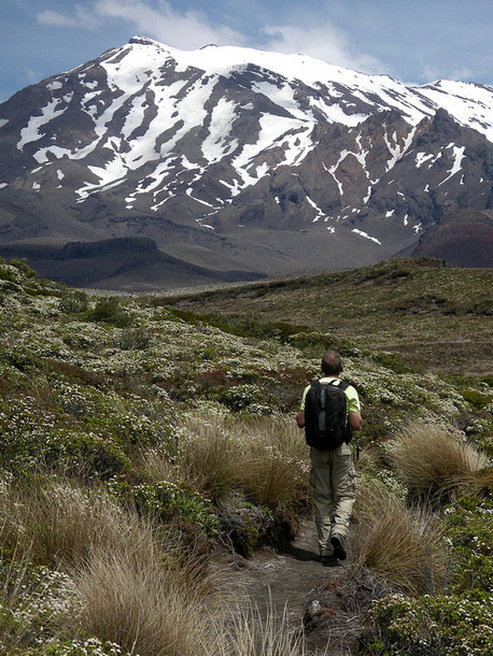 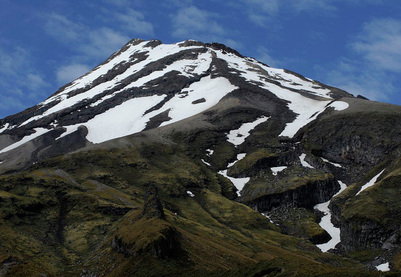 Taranaki from the Veronica Loop Track
Taranaki (Mount Egmont),  the 2518 m tall cone volcano last erupted about 250 years ago at the culmination of eight eruptions in the preceding 300 years. The western 1,500 km2 of the Taranaki region is a volcanic landscape that has been shaped from the products of volcanic eruptions principally derived from the volcano. These deposits around the base of the volcano record intermittent volcanic activity at this site for the last 130,000 years. 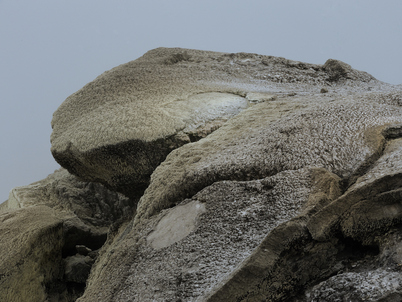 sulphur deposits
Sitting 48 km offshore, Whakaari (White Island) is one of New Zealand's most active cone volcanoes which has been built up by continuous volcanic activity over the past 150,000 years. About 70 percent of the volcano is under the sea, making this massive volcanic structure one of the largest in New Zealand.
In July 2014, on a clear but somewhat frosty day, we headed for Whakaari.